OGS researchers are working in the Levantine Sea from 16 September to 25 October, as invited participants in the APINIL campaign of the French research vessel Le Suroît (see photo). The route of the vessel can be seen here: http://www.ifremer.fr/posnav/PosnavWeb/WFNavire.aspx?navire=suroit.

APINIL, led by Professor Sébastien Migeon, is the latest of a series of campaigns by Géoazur (https://geoazur.oca.eu/) to investigate the Nile deep-sea fan, offshore Egypt. The objectives of APINIL are:

1) to explore the impacts of climatic changes and sea-level variations on the evolution of deep-sea channel systems, and

2) to evaluate geohazards, including the relationships between submarine landslides, fluid seepage and gas hydrates.

OGS participation in APINIL is part of ongoing collaborations with French colleagues at Géoazur into the marine geology of the eastern Mediterranean Sea. Among other activities, the campaign will acquire data for the HYDRANIL project, a collaborative investigation of gas hydrates in the Nile deep-sea fan (led by D. Praeg, OGS). 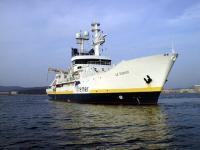